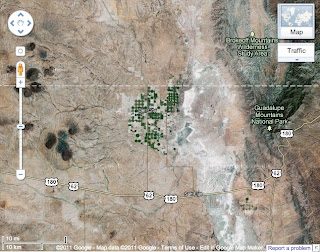 The pivot sprinklers that irrigate many of the crops in Dell City make green circles that are easily seen on the map.  The circles are clearly a manmade feature of the landscape when viewed from space.  I think Dell City looks pretty cool from this vantage point.
Posted by Josh Carter at 10:35 PM 1 comment:

As a portrait of Dell City, the documentary touches on many different subjects related to rural desert life.  One of these is water.  Dell City sits on top of a substantial aquifer (basically, an underground lake).  The discovery of all the water below ground in the 1940s led to the formation of the town.  Farmers moved in because they could grow just about any crop in the middle of the desert by pumping the water to their fields.

The link is to an article in the El Paso Times that makes reference to a complicated issue in Dell City: eventually, the city of El Paso is going to need the water from the aquifer to sustain its growth.  What that means to the future of the community is yet to be seen.  TD Pope, one of the main characters in the film, sums up the situation nicely:

Josh Carter
Tales from Dell City, Texas is a feature documentary about the most out of the way town in Texas. For more info, visit www.talesfromdellcity.com.